While MOB Grill is a salute to owner Marco Morrow’s love for gangster movies and pop culture, “MOB” stands for “Marco’s Onion Burgers.” He began making fried-onion burgers for a love of all things Oklahoma, including his wife Meredith, who hails from the fried-onion burger capital of the world in El Reno. Morrow, half Lebanese, was inspired by considerable consumption of the original onion burger, adding some Lebanese influence with plenty of spices and robust flavors. MOB Grill uses a secret marinade for the onions that are char-pressed into its burgers and griddles buns with mustard—a technique Morrow learned from legendary Ed Thomas, dearly departed founder of Big Ed’s Hamburgers. MOB Grill’s hand-cut fries are made to order and the buns come from La Baguette Bakery in Norman. They also have many more MOB-themed sandwiches, salads, and desserts. Come and get some … capiche!

Double the version of MOB’s signature burger. Double the meat [2/3 lb. of beef] and double the cheese, onions & mustard… BAM! 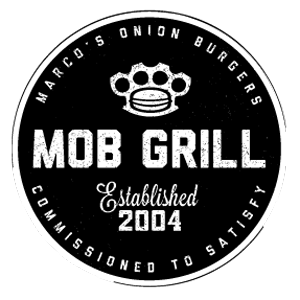